The Paths to BIM Nirvana

"A Building Information Model is a digital representation of physical and functional characteristics of a facility. As such it serves as a shared knowledge resource for information about a facility forming a reliable basis for decisions during its lifecycle from inception onward."

BIM is an intelligent model-based process that provides insight to help you plan, design, construct, and manage buildings and infrastructure

I have a confession.

Before I came to practice BIM Management in Qatar, I had never authored a BIM Execution Plan. I am really “old school” – I began doing 3D architectural modeling before it was called BIM. Among a fraternity of soon to be geriatric colleagues (you know who you are) we were drawn to the technology in search of a better way to create the instruments of service known as drawings. A coordinated set of drawings without errors and inconsistencies that always crept in to the multiple file methodology of CAD. Sure it was cool that the process also yielded three-dimensional images, but 2D quality improvement was the primary driver.

Flash forward 25-30 years. The stakes involved in BIM delivery are much higher. Primarily because of improvements in computing technology (processing power, speed, memory) we have loaded up BIM with many more facets of building design technology. Visualization and analysis were once separate processes – now they are integrated. Facility data management was a manual process; now that too is expected to be delivered by BIM.

In 2003, the United States General Services Administration (GSA), through its Public Buildings Service (PBS) established its National 3D-4D-BIM Program. Agencies of the U.S. military (NAVFAC, USACE, USCG) were among the first official bodies to recognize and institutionalize BIM for design, construction and facility operations. The Associated General Contractors of America (AGC) published its first Guide to Building Information Modeling in 2006.

The American Institute of Architects’ Integrated Project Delivery Guide, which sets forth the principles of collaboration which have become synonymous with BIM Nirvana – the simultaneous involvement of all project stakeholders in the planning, design and execution of buildings and other built assets – was published in 2007. The AIA’s BIM Protocol Exhibit E202 was published in 2008, incorporating groundwork laid by VICO and Webcor Builders regarding the concepts of Level of Development and Model Element Authorship. 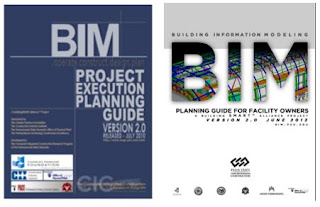 BIM project execution planning began in 2007 with the Penn State CIC research program. BIM then was typically just architectural modeling. “Information Exchange” was mostly theoretical. It was difficult to convince structural engineers of the benefits, and MEP BIM was virtually non-existent. In 2011, the Penn State CIC began the development of the Owner's Guide to Building Information Modeling. The group determined there was a need to develop “a guide for facility owners and operators that includes a procedure to develop a strategy for integrating BIM throughout their organization.”


In May 2011 the UK’s Government Construction Strategy was published, announcing the intention to require collaborative 3D BIM (with all project and asset information, documentation and data being electronic) on its projects by 2016. The “Level 2 Mandate” resulted in the creation of PAS 1192 by the British Standards Institute, which many consider to be the “Holy Grail” of BIM implementation strategies. The UK’s Construction Project Information Committee (CPIc) is a consortium of construction industry organizations. CPIc provides templates which support the PAS 1192 BIM strategy, and is the author of the new Uniclass2 classification system.

PAS 1192 presupposes that Employers Information Requirements precede the development of any BIM planning process. The plain language questions that must be asked and answered may overlook the possibility that, especially in the MENA region, an employer (client, owner) may just respond to some of those questions (i.e. “How will BIM be managed and exploited in this project?) with an “I don’t know.” This should not be a barrier to BIM delivery. Designers especially must be proactive and become advocates for BIM development if progress is to be made.


In the U.S. there is not a government mandate for BIM. The buildingSMARTalliance, a council of the National Institute of Building Sciences, employs a consensus approach to the development of its National BIM Standard (NBIMS-US). BIM development in the U.S. is driven by designers, builders and owners who believe in its benefits and its ROI. Indeed, a study by Autodesk strategist Erin Rae Hoffer indicates that the most heavily invested firms have stopped measuring ROI because they simply “believe”. 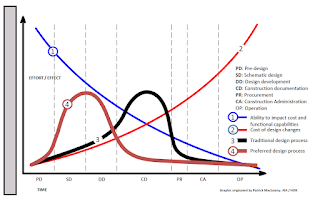 As the well-known MacLeamy Curve illustrates, BIM shifts design and construction project decision-making to an earlier project phase, when the cost of changes is less, and the ability to impact design outcome is greater. It is generally agreed that the major beneficiary of BIM is the owner, with lower construction costs, fewer construction RFIs, and a more efficient building or facility.

So what are the immediate benefits for designers?
There is a vision of the future for building design and construction professionals in which BIM is no longer considered to be an alternative. It will be mainstream. BIM is the natural outcome of technology applied to the process of creating buildings. The previous methods of design delivery will eventually be seen as archaic, outmoded, and no longer relevant.